And not surprisingly, Armitageworld is pretty quiet.  Kind of bittersweet here.  Showbiz has a paying singing engagement at another church, so we won’t see him until later this evening.  I’m on my way out the door soon myself. 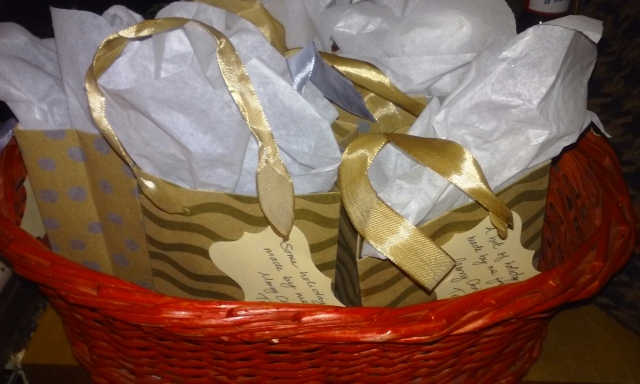 Wherever you are on the globe, I wish you peace, love, joy and hope… 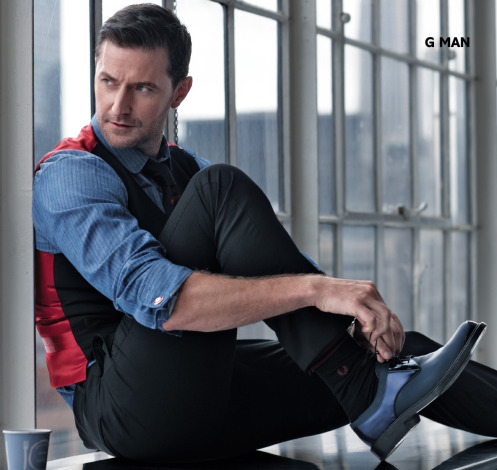 And blue shoes…blue shoes are great!! 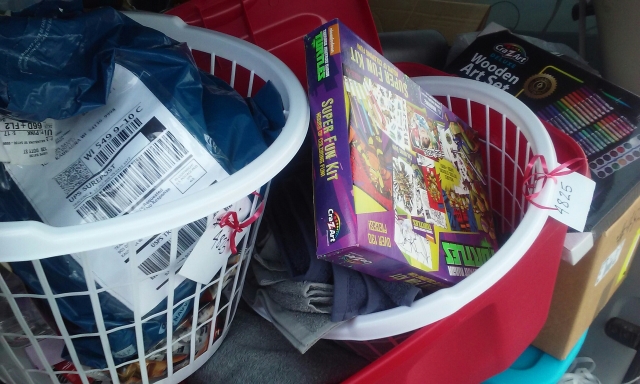 Drop off loot for adopted family✔ 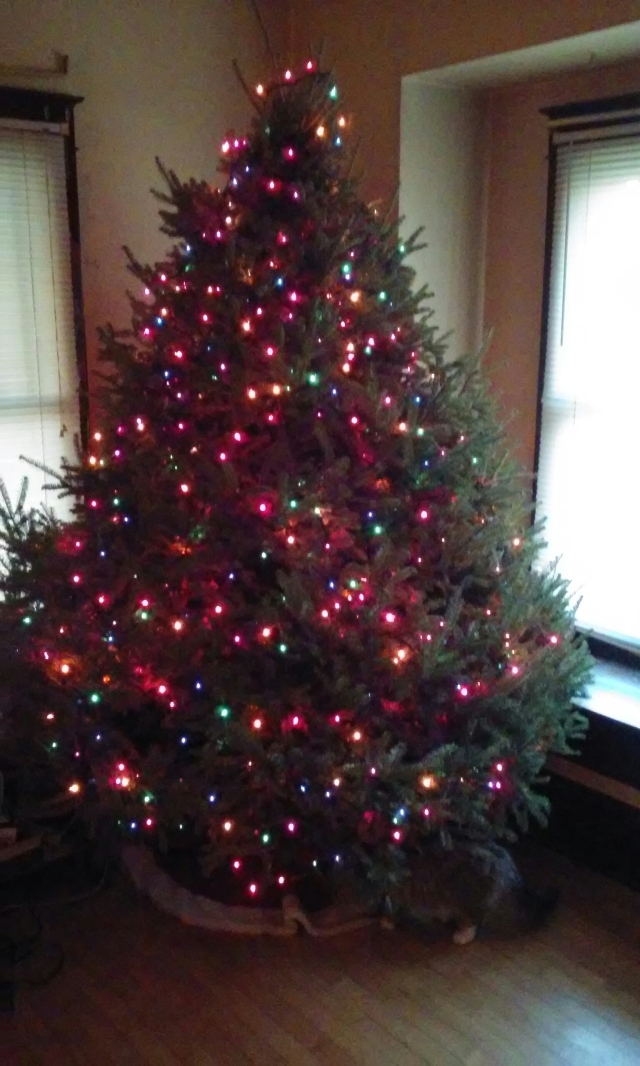 That is about the extent of the things that are checked off on my list of things to do in the next week.

Someone we know referred to me as a “First Grade Procrastinator” …I said, “Thanks for noticing!”  Grading and shopping are among my least favorite things to do…I’ll get it all done – I always do, but until then, look what was hatched from my procrastinating: 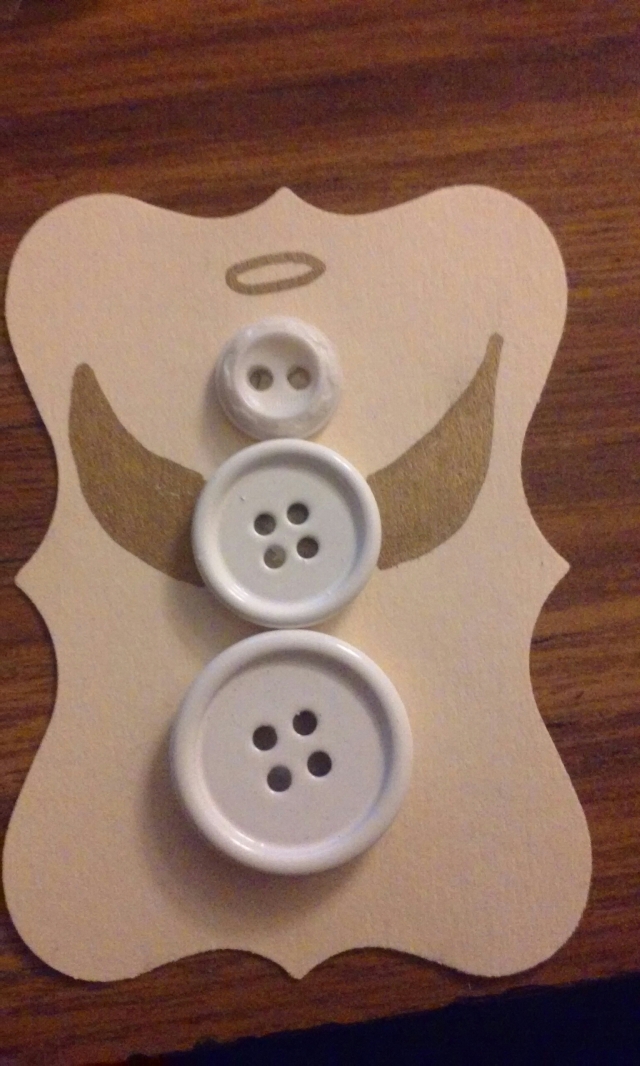 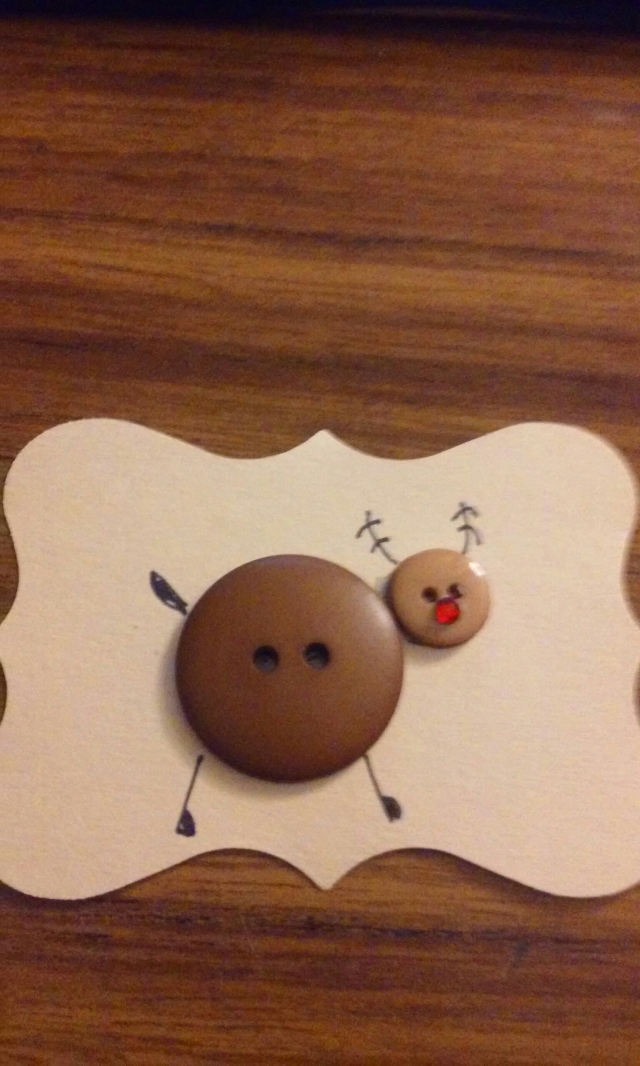 I’m early for being early to MiniMe’s first orchestra concert…she’s in the cello section of the 5th grade (beginner) strings.  They are playing an ambitious song list including:

A moderate preconcert emergency of a mysteriously mobile bow not withstanding, she was excited when I dropped her off at her 6pm call time (stage mom alert)

I remember that excited butterfly tummy feeling.  Especially in this auditorium…where I played all my concerts as a hopelessly mediocre high school violinist. 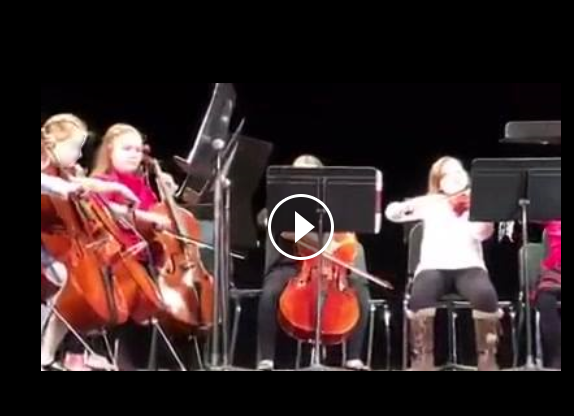 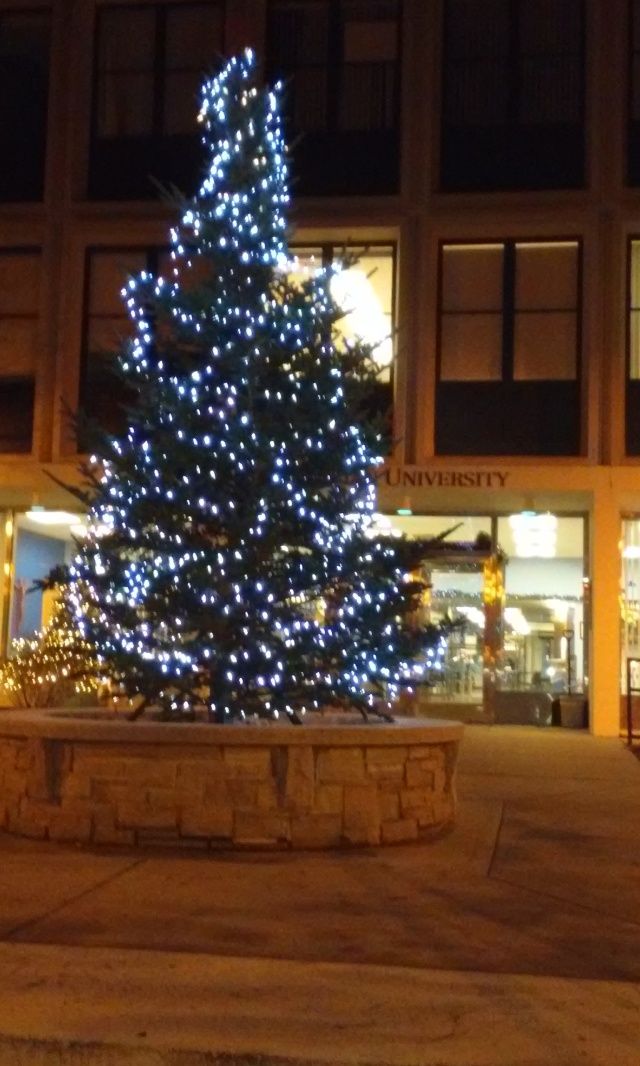 Campus is all spiffed up…

Wait – did you think I was going to wax on about the upcoming Christmas holiday?

Heaven’s no!  Christmas?  That’s still more than two weeks off.  Can’t go there until I put the Fall semester to bed.

This time of year, my intro class hits the late medieval period (I have no idea how I used to be able to take this class through the Reformation!?)  Mors nigra, atra mors, The Great Mortality, The Great Plague are all descriptors for the massive pandemic that hit Europe in the mid 14th Century.  Now commonly referred to as the Black Death, it’s one of the big points to cover the last section of World Civ.

I’ve tried to cover it a number of ways, and this year, since I’ve committed to using group activities at least once in each topical unit, enter the beans! 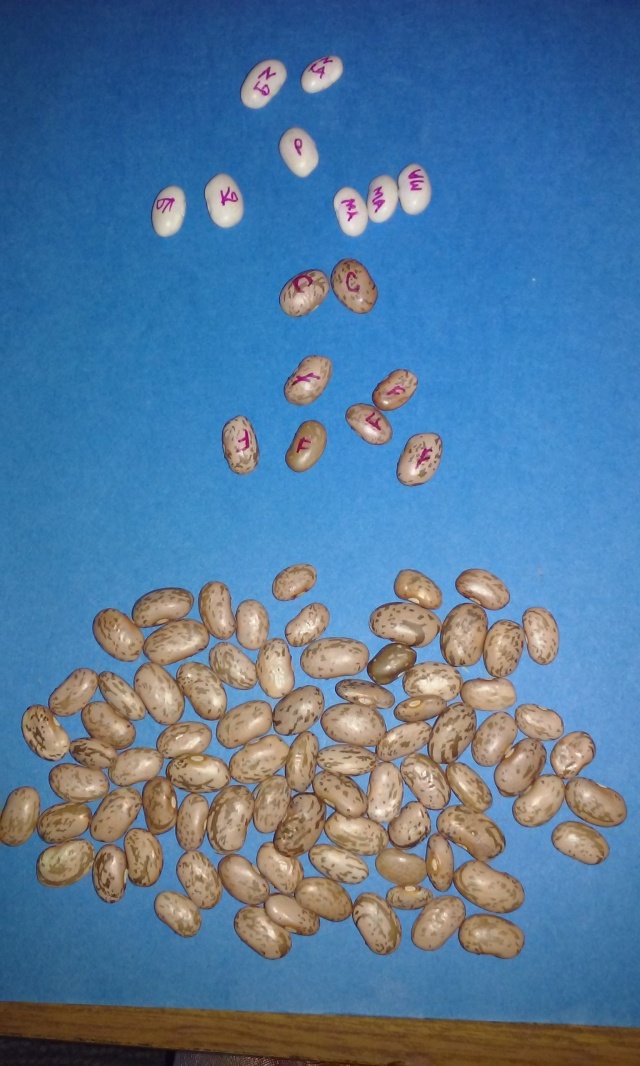 What we have here represents a medieval manor which is about to be infected by the plague.  Each bean represents a person on the manor.  The plain pinto beans are serfs, the “F” pinto beans are free peasants, the “C’s” craftsmen and the white beans are the “others” the Lord, his lady, the parish priest, the manor knights and men at arms.  One hundred beans in all go into a brown paper lunch bag.

Class breaks into groups, each group gets a manor or a town (ie, a bag of beans).  Estimates are that 1/3-1/2 of the overall population of Europe died in 14th century pandemic.  Splitting the difference, each group blindly pulls 41 beans from their bag.  RIP beans – you are the Great Mortality in this simulation…hopefully the local priest was left alive!

The next step is to assess who is left, and how life goes on now. (there is a score sheet)  It is always an interesting process.  Each group has a slightly different survival outcome which will require different means of coping.  Once all the groups have determined their plan for recovery, I set the manors on each other…yesterday’s pestilence left two manors with lord-less, knight-less ladies.  The surviving knights from the remaining manor, decided the time was ripe to get married!

I blow kind of hot and cold on simulations.  I think students generally like them and I think the point about survival, adjustment and recovery was well established, but I have to admit that I am fully expecting to hear about pinto beans on the final exam!

Of course, all of this medieval stuff got me thinking about the forthcoming medieval knight from the neighborhood… 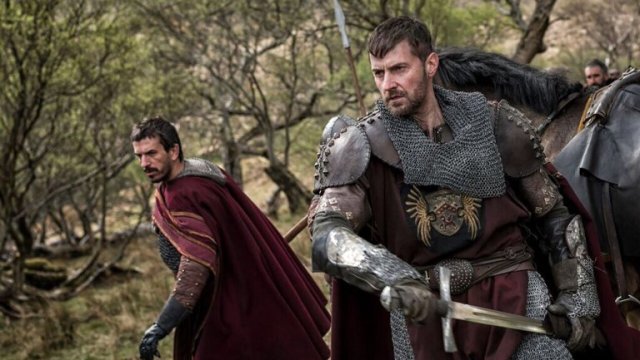 From what I recall, Pilgrimage is set in the 13th century, so well before the onset of the Black Death.  However, since anachronism in period films is common (it’s all medieval right?!), Raymond dear, your mighty sword won’t help you.  If you see anyone with tennis ball sized black carbuncles on their necks, run away…RUN AWAY!!

My maiden voyage into the blogosphere was a guest post me + richard armitage titled World’s Collide almost three years ago to the day.  (Seriously…3 years ago?! Seems like yesterday!)  In a nutshell, I talked about how my interest in Richard Armitage had started to intersect with other areas or “worlds” in my life.

That trend shows no sign of abating.  Earlier this fall, I pointed out that I had deliberately allowed an Armitage Curriculum InfiltRAtion into a class (that turned out to be less than scintillating I’m afraid…try harder next time!).  More recently, I have marked a new world foRAyed….my craft world has recently become my cRAft world.

I think if I’d had a hot glue gun as a preteen, I might be a crafting giant today.  Alas, too impatient to wait for cold glue to dry, I tossed aside my rug hook and moved on to other pursuits.  However, a couple of decades, two children and multiple knee injuries later, I was in search of something new to occupy my idle hands (such things are dangerous you know).

Necessity, the mother of invention, led me back down the path to crafting.  Of late, I like to wear scarves.  My bestie (she of “canned beaver” fame) turned me on to them.  The problem at hand was that I don’t like them to choke me, and I am apparently not very adept at the myriad ways to wrap them artfully about my swan like nape without them resembling a noose.  What I needed was some sort of brooch or slide to assist.  I shopped…I Googled…and then I Pinterested – 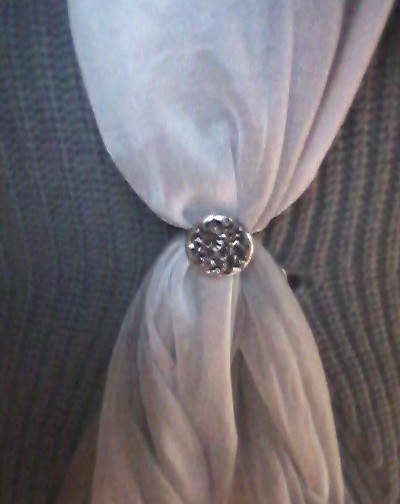 SHAZAM!  A craft was born

All I needed was a cool button and a key ring to thread it onto and I had a pretty new accessory.  I mentioned it to a friend and suddenly I was gifted with a coffee can full of vintage buttons of all varieties… 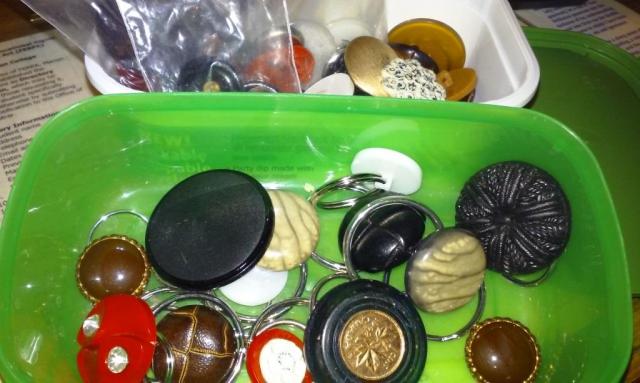 I now have a whole wardrobe of scarf slides for all occasions!  A related issue was what to do with the rest of the buttons…the regular, shankless variety of buttons that filled the coffee can.  Back to Google…”button crafts”  et voilà… 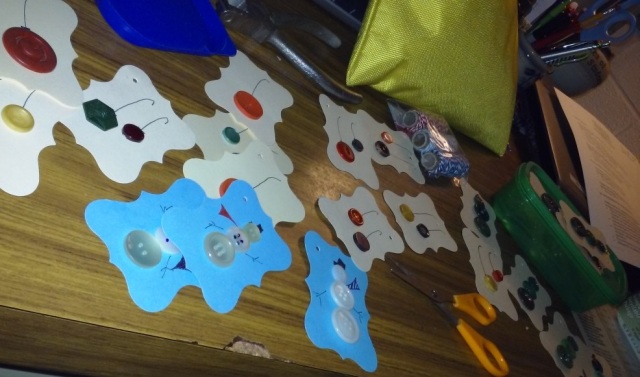 Last year I bought the blank tags at the office supply store – this fall I went whole hog and bought a punch.  Now I punch my own tags out of recycled file folders – I *know* right?!

Where does Richard Armitage appear in this plethora of buttons?  Well, having whet my crafting teeth, I was more than ready when the #RichieHolidaySwap was proposed on Twitter/tumblr , and off to the races thinking of something to make.  (and truthfully, I was just a little bit concerned since the recipient of my cRAft offering would be none other than Nancy, the maker of the most adorable Plushies – check them out here)

After a craft store recon mission worthy of John Porter, I had an idea:  a few downloads, a Pixlr edit here and there, some glue dots and Modge Podge later…. 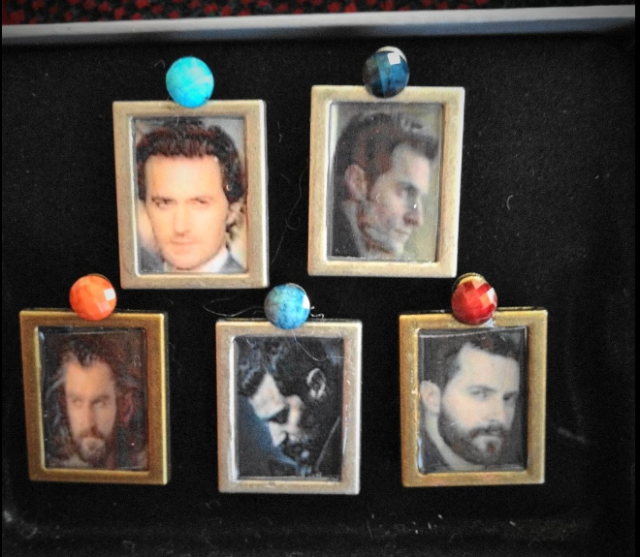 Mini Magnets (each is a little over an inch high)

Another recent world collision – fellow Armitage fan on campus – was the recipient of the prototype model (a sulking Sir Guy) and pronounced that he was “like a Victorian miniature always keeping his eye on her,” from his discreet post on her desk lamp.

So there you have it…the latest Armitage World Incursion…cRAfitage you might say!  (Paenitet me paenitet, non) 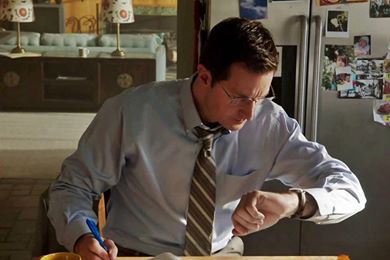 This image jumped right into my head when I recognized that I seem to be in a mood to collate, calculate, consolidate and other c-ate verbs!  I might as well let the spirit move me to do a little record keeping around here.  After all, records must be kept!

Quite a while ago, I started a recurring series of posts on the Virtutes Romanae (Roman Virtues) and today, not for the first time, I noticed that I have to keep going back to look what virtutes I’ve already covered.  For my own sanity, I decided to collate the list here.  This will also come in handy for anyone who’s recently joined the party…since I never bothered to Categorize anything along the way, they are all linked here – live and learn.

My brief accounting shows that I’m only about half way through the list of Roman Virtues…and now I remember why.  Seems I have exhausted the most straight forward and relatively easy to illustrate qualities from the list.  Several of the remaining are a bit more esoteric, and a bit more difficult to connect to the often diffident Richard Armitage with any certainty.   Sounds like a challenge to me! 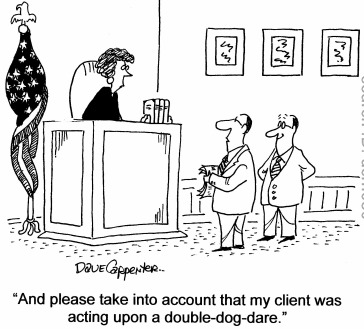 Few can resist the enticement of the double dog dare!

Well, I’ve never been one to walk way from a dare, so I shall apply myself in a renewed effort to make virtutes connections.  I’m guessing that with a good number of new projects debuting in coming months, Richard Armitage will provide me with some excellent compaRAnda!