A challenge you can get your teeth into…

Unless you’ve been living under a rock, you’ll have heard about Richard Armitage’s biting debut as Francis Dolarhyde…aka The Tooth Fairy…on NBC’s Hannibal.  We here at STL like to mark special Armitage events, and this one is no different.  You might wonder how we are going to blend together kindness collection with an orally afflicted serial murderer…that’s easy!

Anyone else remember this from Captain Kangaroo??

In honor of the “Tooth Fairy” we are challenging ArmitageWorld to donate toothbrushes (and/or other oral hygiene products) to local or international organizations in need.  Dental health is directly connected to overall physical health, yet millions of people around the globe lack easy access to oral hygiene products.  Toothbrushes, dental floss, toothpaste and mouthwash regularly show up on the “Things We Need” list for homeless shelters and also for international relief agencies.  Here are just a few I know about:

Heather!!! Get ahold of us via the About tab so ee can get your address.

Thanks to all of you who participated, your kindnesses were an absolute privilege to read! Heartfelt thanks to Servetus for going out of her way to get the poster into The Dude’s hands, and to The Dude for being such a Nice Guy and signing the thing. Keep your eyes peeled to this space because Obscura has another challenge coming up shortly.

Rad ecard that I snaffled from Guylty

The new ArmitageWorld Community Calendar is a little barren for July, but today is “D-Day”  (Discovery Day) for Hariclea of Opera is Magic.  Give her a shout out here, or over at her blog!

The Merriam Webster Word of the Day for today, July 21, 2015 is truculent.  Here’s a little Armitage Truculent for Hariclea’s big day!!

This afternoon I found myself in need of a mood boost (it has been one of those days where pretty much everything that could go wrong or at least sideways, did.)  I skipped lunch because I was in the middle of something, so my first attempt (perhaps misguided) at a mood enhancement was culinary

…OK, comment consensus on Facebook supports that dipping cookies into frosting is not inherently wrong.  However…even my recently confirmed non-diabetic constitution can only take a small does of that (followed by an overwhelming urge to lock the door and take a nap!)

Seeking a less caloric means of attitude adjustment, I clicked over to Tumblr for a little visual lift…

Pardon my prurience, but it’s been a really #$%@#$ day!
Servetus ScreenCap

Boom!  Yeah, that’s definitely a cure for what ailed me.  A panacea if you will...did you think you were getting away with out a classical connection?  Pshaw!  Panacea ( Πανάκεια)…the daughter of Asklepios (God of Medicine) and Epione (Goddess of Soothing),  was the Greek goddess of Universal health and she was rumored to have a single potion which she used to heal all varieties of ailments.  Well then, it’s often been cited that Richard Armitage also has a certain cuRAtive effect for a variety of ills….you might even say he’s a RAnacea!  (Sorry…not sorry.  I really have no control over it at this point…)

On my way over here to tell you all about it, I dropped in at SpReAd the Love to see how the poster drawing pool was shaping up and what I saw really did blow away any traces of ill humor.  What I found were all kinds of new-to-me names reporting acts of kindness given and received…many of them demurring participation in the drawing, but wanting to share in the good will.

One of my very favorite things about this fandom is its capacity for kindness…in and among the admirers, analysts, admiring analysts and analyzing admirers of Richard Armitage, there are a lot of very real, very kind people just going about their business making their corner of the world a bit more pleasant everyday.  Being witness to it never ceases to make my day brighter.

Wow, my Twitter TL is saucy tonight…’cause there’s eating of people and stuff and you need sauce and I’m just going to shut up now. Anyway, it’s the final week till the first appearance of Francis Dolarhyde on Hannibal and Obscura and I have something really cool to celebrate. Last summer during the run of The Crucible a friend of ours went out of her way to get us a poster signed by The Dude and now it’s time to give it away.

This one, in fact. Forgive the glare but check how legible the sig is!

So, to win this fabulous, signed by The Dude poster you know what to do, right? Leave a comment with a kindness that you’ve done or that’s been done for you and we’ll draw one name from all commenters next Saturday around 9PMish ET. Cool? Cool. Okay, cue the hairband and happy commenting!

I’ve been slowing partaking of the SDCC 2015 bounty, and one thing that has fascinated me was the nugget that Richard Armitage has drawn inspiration from Goya’s horrific Saturn Devouring His Son 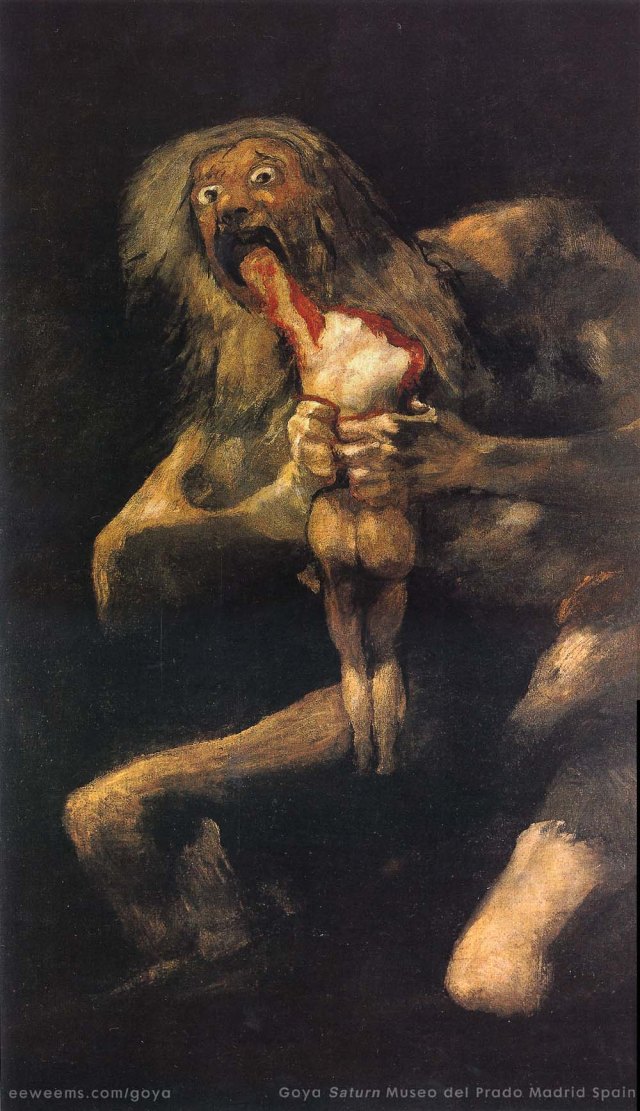 Currently housed in the Prado in Madrid
Source

I haven’t chased down the original source of the quote, but it is referenced here, here and here to name a few.  This is a fascinating insight which has reams of connection to the classical world.

Saturn was originally a very ancient Roman god connected to fertility who was later syncretized to the Greek Titan Kronos.  This piece by Goya is a depiction of a scene from the mythology of Kronos, and it illustrates a relatively common thematic element in classical storytelling.

The Greeks understood their deities to be part of a great cosmic family….generations of gods begetting the next generation of gods.  The poet Hesiod dedicated a massive poem, The Theogony, written in the Homeric epic dialect, to detailing the genealogies of the Greek pantheon.  There is an element that repeats in several generations and is also found in the genealogical myths of non deities…the fear of overthrow by one’s progeny.

The Greeks saw the divine genealogy as unions of the forces of the earth and the sky…when they come together each day, they create children.  The first personified version of this is the marriage of Ouranos (the sky) and Gaia (the earth)  This union was tremendously fertile…the children of Ouranos and Gaia included the Titans among others.  Ouranos was on the paranoid side though, and feared that his children would overthow him.  To prevent this, he essentially crammed them all back into Gaia’s womb which was more than a little uncomfortable for her.  (I cannot make this up!)  To alleviate her pain, Gaia implored her children to free themselves and to deal with their father…she even provided them with a giant sickle to take care of things.

Only the youngest, Kronos, was willing to take the challenge.  He took up the sickle and freed himself before using it to castrate Ouranos, solving all of Gaia’s problems and making himself the new ruling god.  While the Greeks are happy enough to describe these gory scenes in literature, it is not so common to find them in artisitic depictions.  In fact, the most common visual element of this story is the part where Kronos flings the castrated genitals of Ouranos into the sea.  Hesiod describes how the seed of Ouranos and the sea created a foam out of which rose the most beautiful of the Greek gods – Aphrodite 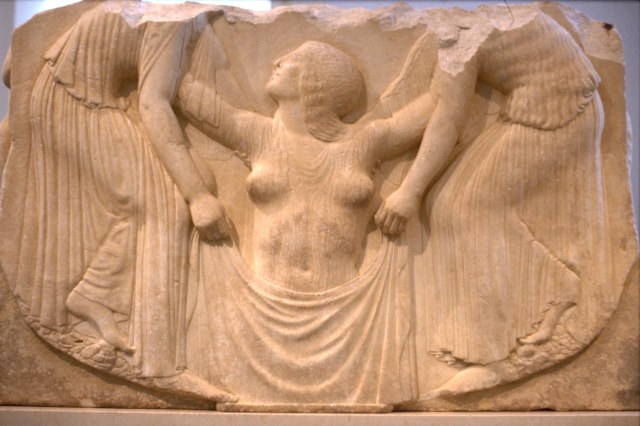 Kronos goes on to take control of the cosmos and then to generate his own family by marrying his sister Rhea (another earth goddess).  Having usurped his own father to take power, Kronos was understandably afraid of overthrow by his offspring.  He’d learned that mothers could not be trusted to keep their children under control, so he took matters into his own hands…literally.  Everytime Rhea bore a child, he took it from her and consumed it (hence the Goya).  Like the castration of Ouranos, ancient Greek depictions of this event are decidedly less gory 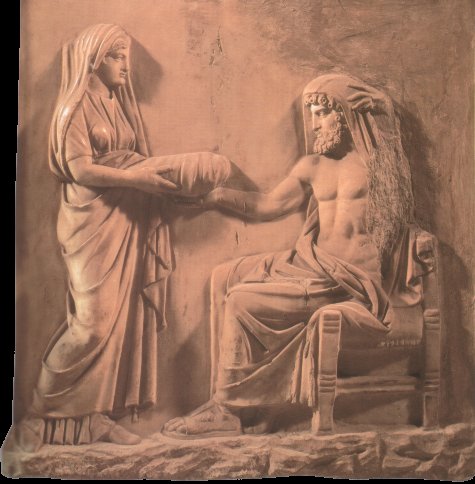 Rhea hands swaddled baby to Kronos…kind of like a burrito?

By birth number twelve, Rhea had had enough of this game and secretly sent her youngest, Zeus, off to a cave on Crete to be raised by a magical goat (again, not making this up).  To keep Kronos from being suspicious, she handed him a swaddled stone to swallow instead.  What happens next?  You guessed it, Zeus grows to maturity, frees his siblings (the older Olympian gods) from Kronos and it’s on.

Zeus is the last in the family tree to consume his offspring…well, with Athena, he consumes her pregnant mother Metis, but finds out that this won’t work either…

…when sometime later Athena pops out of his head –  fully grown and fully armed !

Child eating seems to have a rather storied past with the ancient Greeks…it begs the question what they were really afraid of that there is such a plethora of it in their cosmogony.  The topic also makes me extremely curious as to what other roles Richard Armitage used this imagery to inspire.  Francis Dolarhyde I get…toothy serial killer.  Other child eating things coming down the road?  I seriously hope he elaborates on this somewhere!

Look at that, time for lunch!

It’s Medea season again…I love having a new class get their teeth into this play.  Today was the day I throw the discussion turner in and my students rose well to the challenge, several of them noting the timelessness of the themes.  This comment really grabbed me…

“That being said, I think the themes of this play are still relevant today.  I would really enjoy seeing a modern adaption of it performed.  Perhaps it could take place in modern day Dallas, Hollywood, or Wisconsin.”

Hmmmm…maybe I should get to work on that…especially since I have someone in mind for Jason!