I thought I had positioned myself for this to be a good Monday – maybe really good.  Last week was all but brutal…I hit the ground running after returning from Greece and felt like I was swimming in deep water most of the week.  By Friday afternoon though, things were starting to get better.  I had word from Kos that the boxes of dental hygiene kits and school supplies I’d sent a week ago had arrived safely – good news indeed since for the extremely low shipping costs, I had thought they were travelling via donkey cart.  By Sunday afternoon, having spent several hours grading and formatting, I had the most intensive of my three active courses up to date and ready to fly.  I was in good shape for the new work week.  Was.

That all came to an end and my current state of tipping between irritation and disgust started, when I woke up around 1am (I do that often enough) and looking at my phone for the time, noticed an Outlook notification.

I know I should have ignored it and gone back to bed, but sometimes I can’t sleep and I can get some correspondence sorted in the interim.  I’d also sent some emails to associates in Europe, so I thought I might get in front of that.

Instead, it was this (name redacted to protect the sender…I’m good about that even when the sender is being a complete and utter TOOL)

Given the reaction of this student – a fully grown adult student in an upper level college course on Greek History – you might wonder what kind of depraved licentiousness I assigned (in addition to the piece above) that provoked it.  Rest assured, I did not spend extra time delving through the catalog of Ancient Greece’s Most Shocking and Immoral works…the assigned piece was a YouTube video of a college production of Aristophanes’ Lysistrata.

While I will grant you that this play is certainly risque leaning heavily toward bawdy, it is also not out of place in a class week which was centered on the topic of the Peloponnesian War.  Part of what this class is doing is analyzing primary source material in an effort to better understand the history and culture of ancient Greece.  This play is a great primary source.  It was first produced 411 BCE, just two years after Athens’ cataclysmic defeat in the Sicilian Expedition, and is generally regarded as a clear commentary on the war.

The action revolves around the title character, an Athenian woman named Lysistrata (which means ‘Army Disbander’) who comes up with an ingenious plan.  She rallies all of the women of Greece – Athenian, Spartan and all points in between – to go on a sex strike until their husbands agree to end the war.  Not surprisingly, the play is full of a whole panoply of of sexual innuendo and outright dick jokes – complete with male character costumes sporting outsized erect phalluses in ancient staging.  It is also a hilariously funny commentary on gender relations in ancient Greece…undoubtedly made more funny in the original by the fact that every single female character would have been played by a male actor in drag.

This play is pretty standard fare in classical studies courses at all kinds of universities regardless of their religious affiliation, and a quick search reveals that numerous Catholic universities have run productions of the very same play over the years…it is hardly uncharted territory.  I have never, in 15 years of teaching at my current university (a Catholic institution), been asked to avoid addressing any aspect of classical culture for fear of offending a student.  In fact, part of the liberal arts mission is to challenge students to open their minds and experience other cultures without prejudice.  Epic fail in this case.

In the end, I provided this student an alternative assignment…a big, heavy passage from the historian Thucydides (Servetus may be the only person I know who doesn’t groan at the prospect), but I must confess that I am startled and dismayed that in 2016 a student, enrolled at a liberal arts institution, is comfortable relaying such a clear level of narrow mindedness and outright homophobia to me, her professor.    It bothers me as an educator, but it bothers me a lot more as a human and especially as a parent of a child whos sexual identity would apparently cause this person to be uncomfortable.  I am a professional, so I didn’t suggest that perhap a different class would suit better because I find this attitude offensive.  I’ve already come up with an alternate to this week’s film, Alexander (2004) in case it too is deemed “inappropriate” with its homoerotic undertones and all.

Hopefully I’ve purged at least a little of this annoyance so that I can get through the final two weeks of this class without completely losing my s@#t at someone!  (I’m making a case that we should earn hazard pay for teaching upper level liberal arts classes online!)

Today while I was in my office excavating through the remains of January – May, I “unearthed” visual proof of why, despite all my angst, I love my job… 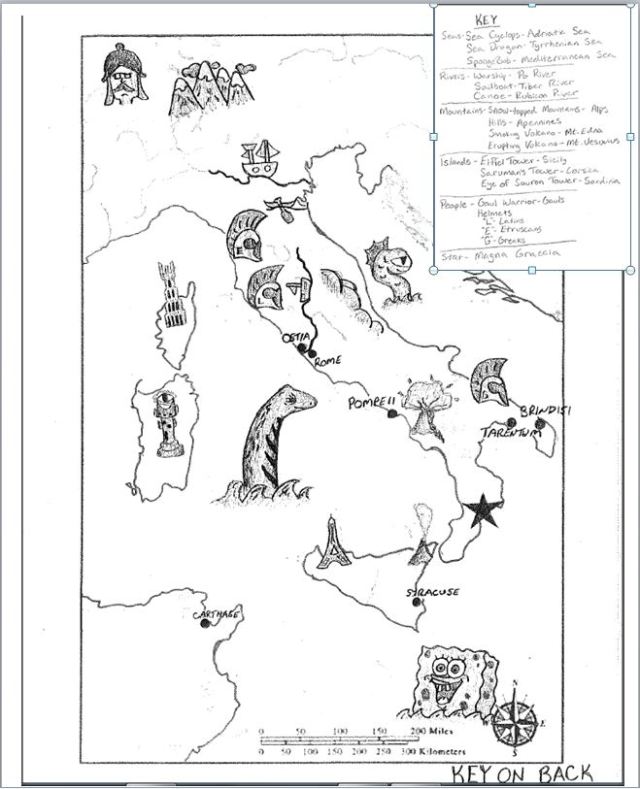 I’ve had this for at least five years, and ever time it re-emerges it makes me smile and remember why I do what I do.  May we all have these little reminders more often!!  (I especially love the rivers…a different kind of vessel for each…who says geography and history stifle creativity?)