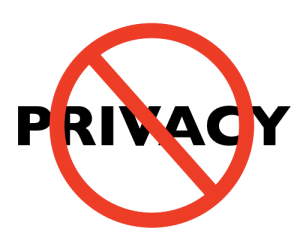 I have long since given up any expectation of privacy in my house. I have a husband, two children and two cats…suffice it to say, I am rarely alone and when I am, it is a transitory state. Case in point: One day this week, I was in the bathroom (ah, not taking a bath) when my daughter bursts in carrying my iPad. The conversation goes something like this…

Mini Me: “I wanna show you something!”

Me: “Can it wait until I have pants on?”

Mini Me: “Look at this one…it’s a mini Cinnamon (the other cat)”

She looks at me again, perplexed as to why I’m not more enthusiastic about the kitten pictures she’s recently discovered on Craigslist (I’d like to take a moment to thank my sister for turning her on to this!) before she shrugs and heads out, leaving the door wide open. *SIGH* It is a day in the life around my house.

My son is a bit more cautious since becoming a teenager, but it doesn’t stop him from barging into my room to ask a question and then shrieking about whatever state of undress he found me in…UM, the door was closed dude – ever heard of knocking?

The lack of physical privacy has become so routine that I hardly notice it anymore. Maybe I never did since I grew up in a household that didn’t place much of a prohibition on family nudity. Shocking, I know, since I’m American, and moreover from the Midwest. My East Coast husband is much more uptight about it….maybe it’s because he’s a Catholic and I’m a prostitute – I mean a Protestant – I’m not sure 🙂

I will admit that despite my slightly hippie upbringing in the nudity department, I was completely at a loss the first time I went to the beach in Greece with my Scandinavian digmates…I didn’t know where to look as bikini tops went flying and the guys were swimming in white cotton boxer shorts…that’s a lot of information!

Anyhow, physical privacy aside, I’ve found out recently, that I need to take more care to protect my digital privacy – not from hackers or identity thieves, but from a much more pernicious threat – my family. Despite the fact that there are personal personal computers in the house for each of us, in addition to the smart phones and tablets, everyone, at one point or another everyone ends up on my laptop. I’ve thought about password protecting the whole thing, but that just gets to be a hassle everytime Mini Me wants to watch I, Carly in the kitchen or Obsurus needs to check his bank balance and his laptop is taking too long to boot (I warned him about Vista!). Sooner or later they will end up where I’d rather they not be…in my fan fics.

I’ve talked here about the *dangers* of allowing one’s spouse to read one’s RAcy writing. A whole second danger is the voracious early reader. My fourteen year old son is completely skeeved by any and all notions of parental sexuality, so he avoids any evidence of it like the plague. My soon to be eight year old daughter hasn’t gotten to that point yet. She is an avid and inquistive reader, and anything she happens across is fair game. So far it’s only been Christmas lists and other “secret” missives, but I would really rather not have to explain the contents of some of the files on my hard drive to her just yet. So, if you don’t want unauthorized readers of your RAcy fanfics, Caveat Scriptor: just say yes to password protect! 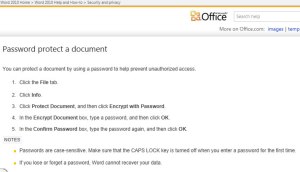 Here is the process in MSOffice – Mac users, you’re on your own…