The spring semester is in full swing and after a brief hiatus, I’m back in Rome again…HBO’s Rome, that is.  I suppose it’s not surprising that I’m veering toward things Roman.  Res Romani Equites as it happens.

The equestrian statue…namely, a general or other prominent person ahorse, can be found in many ancient cultures, but it became a characteristically Roman thing.  The Romans, in all of their militaristic showmanship, really loved the commemorative life sized equestrian statue…a pedestrian strolling through the ancient Roman forum would have passed any number of them. 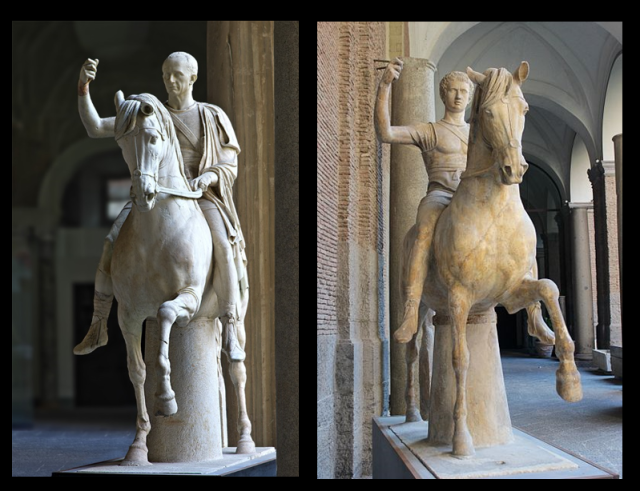 This pair depicting the proconsul Marcus Nonius Balbus, was found in prominent position in the forum of the seaside resort of Herculaneum which was buried by the eruption of Mt. Vesuvius in 79AD.  The cities of Vesuvius yielded a number of well preserved examples of one the Roman’s favorite forms of public display…but all in marble.  Marble statues are nice, but the cream of the crop equestrian statues in Rome, depicting victorious generals and conquering emperors, would certainly have been cast in beautiful gleaming bronze.

The problem with bronze is that nobody following the Romans chose pagan equestrian statues over Christian cannon balls and bullets.  In fact, later inhabitants of previously Roman territories were so diligent in melting these statues down, that only a single one remains…

Most scholars agree that this bronze escaped the melting pot because it was originally mis-attributed as a sculpture of the 4th century emperor Constantine who was the first Roman emperor to convert to Christianity.   It really is a beautiful example of Roman bronzework and of the interest they had in displaying imperial power.  The bits of the horse’s face that are free of patina give a hint at how stunning pieces like this would have looked when gleaming in the Roman sunlight.

Given Richard Armitage’s well established affinity to a number of res Romani, it stands to reason that he could give a credible showing in this beloved Roman genre, and sure enough,

he nails the overall equestrian stance here as Guy of Gisborne in Robin Hood S2 Ep10, and a close up reveals that he’s got the imperial gravitas under control as well.

Fast forward a few years and here he is again…as a king this time…once again owning the equestrian look:

I would be remiss if I didn’t point out that he’s cheating a bit since he’s using stirrups where the Roman equestrians are clearly without them. (Much more challenging to keep one’s seat and control ones mount without stirrups – they are not thought to have arrived in Europe until the Middle Ages).

Speaking of the Middle Ages, I’m anticipating an impressive addition to the equestrian corpus once Raymond de Merville arrives on the scene.

Methinks I spy a stirrup off the left gauntlet…