I had finally extricated myself from Hobbit fever.  With the exception of following some ongoing fanfiction pieces, I really had.  Well, that’s over!  The storm before the bigger storm blew into the U.S. on Monday when the first new images of Richard Armitage down under hit the web. Last year I was rather ambivalent about The Hobbit project, not being a huge fan of Tolkien and having an aversion to ginormous blockbuster film franchises in general, but the pull of Armitageworld was much too strong.  This time around, I’m not wasting precious energy on resistance since it’s futile anyway.  I was thinking last night about what to do…classics, hobbit, Thorin…classics, Thorin, hero….Thorin, hero, epic.  Aha!  There it is – Thorin as an epic hero, in the vein of Homeric heroes like Odysseus and Achilles.

Epic as a literary form appears in a variety cultures.  The Epic of Gilgamesh of Ancient Sumeria, The Mahabharata of Vedic India, The Epic of Sundiata in Mali are a few that come to mind.  Of the group, I would hazard to guess that the Homeric epics, The Iliad and The Odyssey are the most widely known in the western tradition.  Most of us educated in this tradition have either read them, read parts of them, or have encountered Homeric themes in one way or another along the way.  Many of the conventions developed regarding epic evolved out of examination of the Homeric texts, a fact which works out well for me.  The characteristic features of the epic hero are dealt with in numerous and sundry places, but The Victorian Web entry on Heroic Poetry does a nice job of summing the topic up in readable English at a single location, so all the quotes below are drawn from that synopsis.

J.R.R. Tolkien was certain to have encountered Homer in the course of his studies in English Literature and philology at Oxford, and it is not difficult to find the influence of Homeric epic in the pages of The Hobbit or The Lord of The Rings trilogy.  A simple Google search will reveal that much ink, both real and virtual has been spilled on the Homeric qualities of the Lord of the Rings cycle, and also on trying to work Bilbo Baggins’ quest into the epic form.  What I didn’t find immediately was any sign of people making the connection between Homeric heroes and Thorin Oakenshield.  (If anyone knows of such, I’d love to see it.)  At first glance, I think that there are enormous similarities, especially in Peter Jackson and Richard Armitage’s version of Thorin.

Disclaimer:  Before I continue, I’d like to note for the record that I’m neither a Tolkien scholar (The book was read to me in 2nd grade and I may have dozed through parts – don’t judge!  It was immediately after lunch recess and I was 7.  Besides, Tolkien apparently used it as a bedtime story.) or a specialist in Homeric poetry.  I’ll be referring heavily to the screen version of The Hobbit, and as for the Homeric scholars in the crowd…whatever, this is a blog, not a master’s thesis.  🙂

Thorin Oakenshield as an Epic Hero

1. “The hero is introduced in the midst of turmoil, at a point well into the story; antecedent action will be recounted in flashbacks.”

Thorin Arrives in Bag End
Screen Cap from Gallika.com via The Heirs of Durin

2. “The hero is not only a warrior and a leader, but also a polished speaker who can address councils of chieftains or elders with eloquence and confidence.”

Rallying the Troops
Screen Cap from Gallika.com via The Heirs of Durin

“Loyalty, honor and a willing heart…”
Screen Cap from Gallika.com via The Heirs of Durin

3. “The hero, often a demi-god, possesses distinctive weapons of great size and power, often heirlooms or presents from the gods.”

Discovery of Orcrist
Screen Cap from Gallika.com via The Heirs of Durin

4. “The hero must undertake a long, perilous journey, often involving a descent into the Underworld (Greek, “Neukeia“), which tests his endurance, courage, and cunning.” 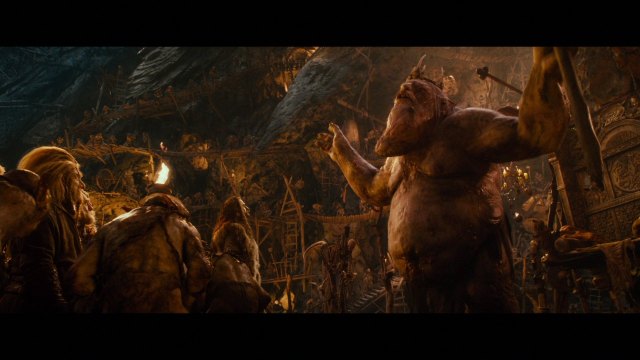 The Goblin Kingdom
Screen cap from Gallika.com via The Heirs of Durin

5. “Although his fellows may be great warriors (like Achilles and Beowulf, he may have a commitatus, or group of noble followers with whom he grew up), he undertakes a task that no one else dare attempt.”

Thorin to the rescue…
Screen cap from Gallika.com via The Heirs of Durin

6. “Whatever virtues his race most prizes, these the epic hero as a cultural exemplar possesses in abundance. His key quality is often emphasized by his stock epithet: “Resourceful Odysseus,” “swift-footed Achilles,” “pious AEneas.””

The Oakenshield
Screen cap from Gallika.com via The Heirs of Durin

7. The concept of arete (Greek for “bringing virtue to perfection”) is crucial to understanding the epic protagonist. 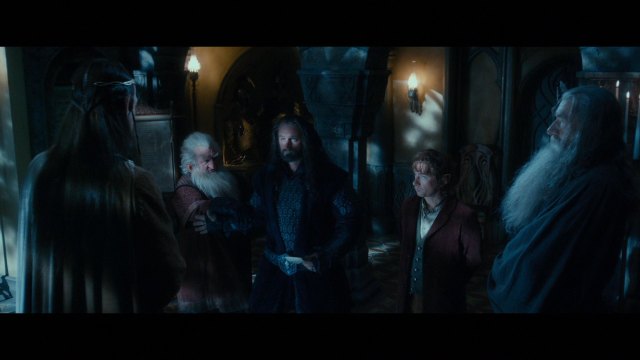 Thorin beats back hubris for the good of the quest
Screen cap from Gallika.com via The Heirs of Durin

8. “The hero establishes his aristeia (nobility) through single combat in superari a superiore, honor coming from being vanquished by a superior foe. That is, a hero gains little honor by slaying a lesser mortal, but only by challenging heroes like himself or adversaries of superhuman power.”

9. “The two great epic adversaries, the hero and his antagonist, meet at the climax, which must be delayed as long as possible to sustain maximum interest. One such device for delaying this confrontation is the nephelistic rescue (utilized by Homer to rescue Paris from almost certain death and defeat at the hands of Menelaus in the Iliad).”

10. “The hero’s epic adversary is often a “god-despiser,” one who has more respect for his own mental and physical abilities than for the power of the gods. The adversary might also be a good man sponsored by lesser deities, or one whom the gods desert at a crucial moment.”

Thorin in the grip of Azog
Screen cap from Gallika.com via The Heirs of Durin

11. “The hero may encounter a numinous phenomenon (a place or person having a divine or supernatural force) such as a haunted wood or enchanting sorceress that he most use strength, cunning, and divine assistance to overcome.”

Even just this cursory glance through the The Hobbit: An Unexpected Journey has provided us with ample indication that there is definitely a Homeric quality to the characterization of Thorin Oakenshield.  I’m not so far gone as to argue that Richard Armitage is a hero along Homeric lines, but he sure does play one well at work!