I was doing really well coming to terms with the fact that I would not be seeing Richard Armitage perform as John Proctor at the Old Vic this summer.  I was only a sort of pale pea green with envy.  Until two days ago, and then this happened:

I started running the logistics.  I have a valid passport and an excellent rolling suitcase (interestingly enough, it’s green).  I could probably scrape up the cost of admission, so what’s left?  Oh, that’s right…there’s that little matter of transatlantic airfare and accommodations in a moderately pricey global capital.  My husband just laughed at my increasingly avocado tinged skin.  “What’s the big deal?” he says… “it’s not like The Crucible is hot or something.”  Oh really?  Is that so?

I’ve always been kind of amused by the contemporary notion that sex was completely taboo in the 17th – 19th centuries…that sexual expression is a product of the modern world.  Yeah, not really.  Puritan society was having plenty of sex, it was just legally confined to the context of marriage.  The fact that Puritan law made adultery a capital offense is certainly suggestive that adultery existed.  Adultery has always existed, and so have sanctions against it.  One of the things I find most interesting about studying the activities of the human animal is no matter what the time period or the culture, the harder authority tries to crack down on something, the more enticing it becomes to humans.

There has been a lot of discussion about The Crucible being parallel to the “witch hunt” socio-political context of the McCarthy hearings, and that is certainly interesting, but I’m also very intrigued by the sexual politics of the play.  Arthur Miller adjusted the age of the Abigail Williams character to allow for an adulterous affair between her and John Proctor, an affair that fuels much of the conflict.   His guilt over the affair and her desire to continue it, to the point of implicating his wife as a witch to get her out of the way, creates an enormous sexual tension that runs behind the “witch” trials in the play.  I doubt I’m the first person to note Miller’s allusion to the renewed sexual repression of the 1950’s America after a period of loosening social and sexual mores in the interwar period (1920’s-30’s).  If the images from rehearsal are anything to go by, this production promises to deliver the goods on a variety of levels. 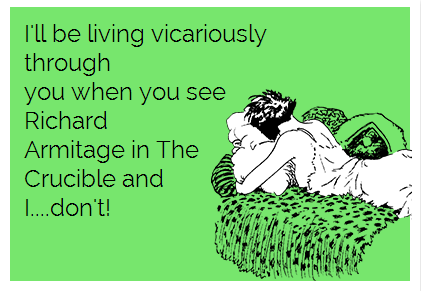 In all seriousness…to all who are going to see the play, have a fabulous time!  (and for the love of all that’s holy, throw me some crumbs and let me know the details when you regain the power of speech!!)