From The Old Vic

I’ve been wanting to talk about the connections between Arthur Miller’s The Crucible and Greek tragedy (and they are legion) but I very often shy away from blogging about the hard core literary side of the classical tradition.  It’s not that I’m not interested in it, but that in the past, I’ve felt out of my depth in such conversations with colleagues. Part of it has to do with the specific path of study of Classical Archaeologists versus that of Classicists.  I’ve studied both ancient Greek and Latin, being required to exhibit proficiency in both.  However, while my classicist colleagues went on to hone their language skills, I was learning to triangulate a point in three dimensions with a plumb bob (prior to GPS locating) to accurately map field discoveries.   I’ve read a large amount of Greek literature both in Greek and in translation, but when the Classicists moved on to in depth critical analysis of Greek dramas, I was learning about the physical forces that make buildings stand up (and fall down) and the difference between the Severe and Hellenistic styles in Greek sculpture, vase painting and architecture.

You see the thing is, Classical Archaeology is a field that is really a composite of information incorporated from several different disciplines.   We study methods and theory of field archaeology to be able to excavate source material, and while I know that there are archaeologists who work primarily in the excavation (in the US for instance, there are contract archaeologists who work for governmental and private agencies to undertake “rescue” excavations to salvage materials that are in the path of destruction, usually from some kind of construction project.) Classical Archaeologists must also complete graduate level work in art history, classical civilization, ancient and modern languages, history, anthropology and a host of other subjects depending on what their special area of interest is – ask me how those ceramic classes went sometime!  Essentially, in the face of everything that has to be crammed into the schedule, something’s got to give, and for me, it was literature, drama, especially tragedy, included.

Up until now, I’d kind of bought into the notion that I really wasn’t well versed enough to comment in any depth about classical tragedy, but as I was re-reading The Crucible over the past week or so, I’ve realized that’s crap.  As reports pour in from the first two preview performances, I’ve been struck by how strong the impact on the audience has been…especially from people who had no prior knowledge of the play.  These reports really resonated with me, because it strikes me that this is exactly what drama should do….it should make an impact.  Commenting about drama need not be confined to critically picking apart the text or even the specifics of performances, but also can include a discussion of the reaction it produces in an individual.  One doesn’t need an advanced degree to do this, just the desire to look closely at the play and ask why it causes the reactions it does. 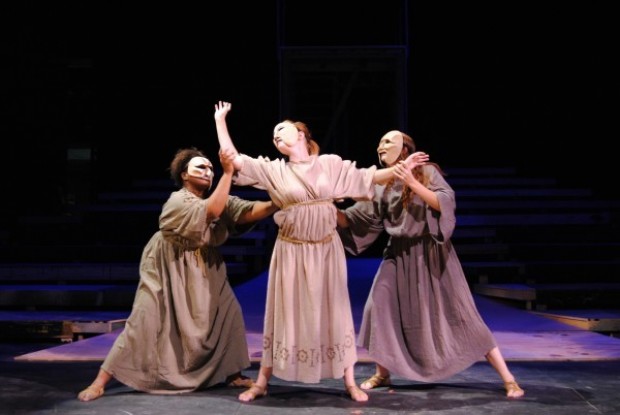 A University of South Dakota production of Medea
Source

Ancient Greek theater had its origins in religious ritual, eventually evolving and attaching itself to the worship of the god Dionysus, especially in Athens.  As such, Greek tragedy was not written for an erudite audience, but for the οἱ πολλοί (hoi polloi) – the masses.  These masses, whose education varied from wholly illiterate to Platonic scholarship, would all have been well versed in the mythological landscape in which tragedies were set.  No spoiler alerts were required…everyone in the theater knew that Oedipus would blind himself and Pentheus would lose his head.  The Classical Greeks went to the theater to see how an individual playwright would spin an ancient story in a new and interesting way.  How an old tale could be written to produce a new response.

In essence, that’s what the classical playwrights were trying to do…to take these well known myths and evoke a visceral response in the audience by focusing on themes and concepts that were ideologically important or conversely, frightening to the Greeks.  For the audience, no special knowledge of dramatic theory was necessary…one only need be human.  In a sense, every audience member judges the success of a performance, but for the Greeks this took a literal turn.

Tragedies were written and produced in a competition that was a part of the festival devoted to Dionysus.  Playwrights competed for a spot in the festival, and the three finalists each submitted three tragedies and a satyr play which were performed and judged.  The ten judges were drawn by lot from a pool of eligible candidates within each of the ten tribes of Athens and represented a mix of ordinary citizens, whose primary connection to the theater was as spectators, and those with a more professional interest.  At the end of performances, each of the ten judges would write their three winners in order of preference on a tablet.  The ten tablets were placed into a container, and then five were chosen at random to prevent bribery and bias.  The votes on these five tablets were tallied to determine the winners.

The assessment of the success of modern dramatic performance has changed considerably from its ancient antecedent.  While audience impression is still important to the commercial success of a production, a great deal of emphasis is now placed on the opinions of professional theater critics.  I suppose that this in part due to a kind of unspoken, yet pervasive, idea that the hoi polloi are not equipped to judge what constitutes “good theater.”  I’m not trying to suggest an overthrow of the system, but I think that this is an attitude that can be misleading at best, and snobbishly exclusionary at worst.  The motivations of modern theatrical performance are not so very different than they ever were – to shock, to amaze, to entertain, to question – namely, to evoke a reaction from the audience.

One of the elements of the preview performances of The Crucible that has been buzzing around Armitageworld is the portion of Act 2 where Richard Armitage is shirtless on stage as John Proctor.  I was kind of disappointed to see that some commenters pooh poohed all the excitement this caused.  Seriously?!  To this I would say, take a look at the original text and stage directions of The Crucible – I defy you to find this element there.  This scene was deliberately crafted by the director Yael Farber and played by the cast specifically to evoke such a visceral, human reaction…no different than cringing in horror at Proctor’s tortured condition in the final act or weeping at his ultimate fate.  It’s an evocative part of a new retelling of an old story.

Drool on…you’re only human!
From the Old Vic

18 comments on “Richard Armitage, The Crucible and Dramatic Impact”