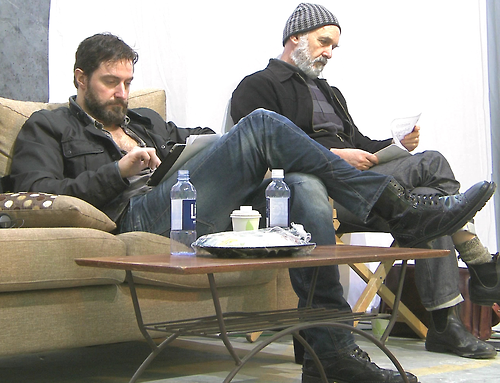 When I first saw this image yesterday I was struck silent (if you know me at all, you know that is saying A LOT!), and evidently, I wasn’t the only one.  What’s not to love? About thirty seconds later I was slightly uncomfortable.  I’ve been out of the Tumblr and blog loop since late last week, so I wasn’t aware of the source of the image.  At first glance, it looked to me as if Richard Armitage was unaware that he was being photographed.   We all have our own ideas and limits on our fangirling.  I’ve generally decided that I will not recirculate any image that appears to have been taken unbeknownst to the subject, especially in a personal setting.  (This is only my personal position, and I make no judgement on anyone who chooses to do otherwise)  Given that this image seems to have been taken in some sort of production “green room” and it appears on the DVD extras, it’s highly unlikely that Richard Armitage was completely unaware of the photographer.

Now that I know that this is a screencap from EE (excellent catch Microlina!!), not a photo snapped by the cellphone of a now unemployed member of The Hobbit catering staff,  I much relieved.  This is a rare glimpse of Richard Armitage at rest.  Not posed, not staged, just relaxed.  I don’t know that I’ve seen another image where he looks quite so laid back as he is here, schlumped on a sofa, not quite idle as he scrolls on a tablet with pages beneath.  The open, un-tucked shirt, the Belstaff jacket, the combat boots…don’t even get me started on how his hair looks damp in the front!  (just come from make-up/prosthetic removal?)  All in all,  it’s a potently artless display of relaxed male.  Here’s where it gets a bit weird…

I saw that image of Richard Armitage, which tripped all of those triggers,  and I immediately thought of a sculpture that I saw when I was in at the Met in New York in March.

This is a Hellenistic representation of Eros, the Greek god of love, laid out, sound asleep and totally relaxed.  Now, before you go there, allow me to explain that the image of Eros as a chubby winged baby belies the potently sexual nature of this divinity to the Greeks.   In some ways, this image of Eros is so innocent that it is dangerous.  That is, people see Aphrodite, in all her voluptuous splendor and run for the hills to escape the power of her sexual spell.  Baby Eros?  Not so much.  He can kind of sneak up on you and hit you with a shot of lust right to the…  – er – … you know what I mean. No so different from the image above…just a guy kicked back relaxing on a couch at the end of a long day…but then….BAM!