If you were dropping by solely for some degree of erudition or classical scholarship…move on my friend.   Today, I’m channeling the four year old me and thinking about the Muppets.  If you haven’t seen the adorable video  of Tom Hiddleston schooling Cookie Monster on the value of patience, here it is..

I watched this yesterday and it reminded me of how much I’ve always loved the Muppets.  I grew up on Sesame Street, and my family also loved The Muppet Show.   It also gave me a clear idea of the mass appeal of Tom Hiddleston and inspired me to ponder how Richard Armitage and his chaRActers might interact with the Muppet crew.  So, without further ado, I give you my Muppet Meanderings… (all Muppet images sourced from muppetwikia.com and all Richard Armitage images from richardarmitagenet.com – crops are mine)

Thorin and Frazzle teach us that even scary looking things have a soft side.

Guy and Oscar have a “scowl off”

Richard and Big Bird chat about being tall

This is really just the tip of the iceberg, but I have to get at least some work done today!  What muppet favorites do you have?  (feel free to share links and pix in comments)  We already know Richard is a little partial to Kermit 🙂

Today’s post was brought to you by the number 16 and the letter T.  😀

Wow, it seems like ages since I’ve blogged! The forces of nature and the academic calendar are conspiring against me. Today’s installment of Virtutes Romanae will serve as an “Armitage Intervention” for me. I’m not going through the list of the Roman virtues in any particular order, but I happened to be thinking about the grey shirt.  You know the one I mean, this one…. 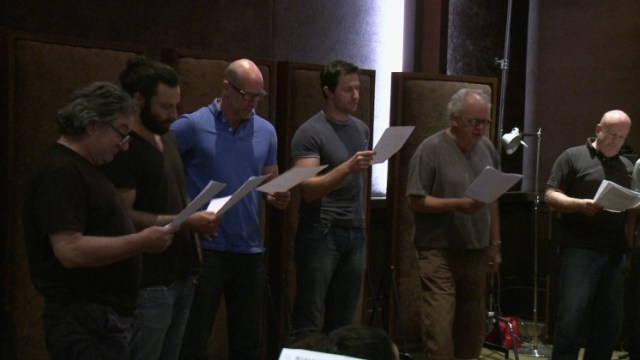 A good shirt is a good shirt!!
Richard Armitage reads “Flat Stanley” on CBeebies (my cap)

and FRUGALITAS came to mind.   One of the things that I’ve come to admire about Richard Armitage is that he seems to know the value of a dollar (or a pound, or whatever currency he’s currently spending 🙂 )  In an industry where fortunes are made and lost in the blink of an eye, this is a pretty rare commodity.   The Romans defined FRUGALITAS as economy or frugality…novaroma.org defines it further as, “”Frugalness” Economy and simplicity of style, without being miserly.”   The important distinction (one that I’m constantly trying to make to my kids) is that exhibiting FRUGALITAS doesn’t mean he’s a tight fisted cheapskate, but rather that he chooses carefully where he spends his money.

That is not the suit of a skinflint:
Wellington premiere of The Hobbit: An Unexpected Journey
can be viewed at Getty Images by searching Richard Armitage

Maybe the quality stems from lessons learned from his parents, or maybe from years of lean living where well paying acting gigs were few and far between.  It could well be a combination of both these reasons and more, but it seems quite clear that while Richard Armitage is willing to outlay significant amounts of cash when he chooses, he also appears equally able to economize,    Try not to get too distracted by all the other visual yumminess below, but look closely at the circled area…

This shirt is still good…so what if the edge is torn?
Source: http://the-hobbit.tumblr.com/post/49023266622/the-hobbit-in-the-makeup-chair-x
(I believe the original image hails from one of the WETA books from The Hobbit.

**correction: The image above comes from, The Hobbit, The Original Guide by Brian Sibley. (Thank you morrighansmuse!) A man who can stun in a designer suit but  recycles some articles of clothing diligently , seems to me to embody the very essence of FRUGALITAS.  🙂