So you didn’t really expect me to let the BAFTA Tea pix to go unanswered did you?  If I thought Richard Armitage’s tease of nape curls at the Wellington premiere of World’s End were reminiscent of Alexander the Great’s famous waves, his most recent appearance with a full head of luscious, long waves is the coiffure of the conqueror 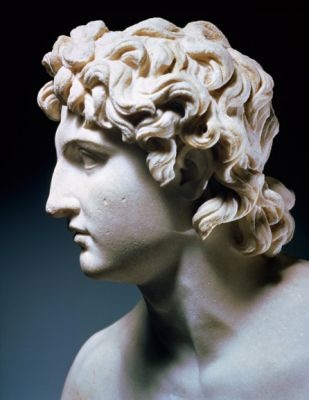 Those curls are not quite right…

This film was released in the heydey of the sword and sandal epics and it is ambitious in it’s scope – staying relatively true history, but (and I love “old” movies) it is deadly dull in spots and rife with hyperbole in others.  I used it in a class once…once.  (Incidently, Burton was only 31 when he played Alexander, pictured above – I would have guessed he was older, but he packed a lot of living into those years I think)

There was a rather marked revival of films set in antiquity after the success of Gladiator (2000), so I guess it was time for a new version of Alexander’s story…enter Oliver Stone with Alexander in 2004.  It looked good on paper…all star cast including Val Kilmer, Jared Leto, Angelina Jolie, Anthony Hopkins as an elderly Ptolemy and Colin Farrell as Alexander.

Closer, but still not right…

I was skeptical…not so much about Farrell, I think he really nailed the destructive self indulgence that plagued Alexander, but more with Jolie, cast as Alexander’s scheming mother Olympias (even though she is only a year older than Farrell)  I could have lived with a very young looking mother (my almost grown son has a very youthful mother 😉  ) but the weird accent for Jolie, the flashbacks, the excruciating soliloquies…ughh – Alexander was famed for being a leader who inspired men to follow him against all odds – Not this Alexander.  And…he hair was nowhere near curly enough!

I know I’m kind of belaboring this point, but I would really love someone to make a film about Alexander that successfully blends the actual history with film artistry.   Just keepin’ it classical!  Although….I am rather curious to see what Richard Armitage would look like as a blonde.  🙂